Today, Voices In Praise had two performances in Nashville. The first, at a local retirement community, was fairly routine. There were the usual hiccups that are inexorably linked to the tour custom of performing extensively at multiple venues in a compact timeframe; instruments were left on the bus, a resident’s hearing aid caused microphone feedback, throats were sore, and a few entrances were missed. The singers and Holly bore it all with their usual grace, but I was beginning to feel frustrated with what I perceived as a void of true musical breakthrough.

This is not to be misconstrued as any form of failure on their part. Their work - be it singing, outreach, or engagement - and their collective presence has left an indelible impression on the lives of everyone they have encountered. They have formed new and durable bonds with each other and discovered a spirit of camaraderie that transcends the casual conditions of association. They have been bold, respectful, and overwhelmingly pleasant. Despite all of this, I was still waiting for a musical triumph.

The second performance took place at the Nashville Public Library. The structure is an impressive rendering of marble and tile, creating an unusually responsive acoustic. The choir was placed on the second level overlooking the main lobby where there was an alcove carved out of the east wall. This little space seemed to be cut just for us. VIP and the accompanying instruments fit snugly but comfortably in this little niche that naturally amplified their sound while allowing the same to resonate amongst the singers themselves. The result of this placement was an aural gift, one not typically found outside the vaulted ceilings of a cathedral or the engineered walls of a recording studio: the singers could hear each other intimately while the sound was still adequately projected to the audience - a choristers dream!

Every VIP tour that I have participated in (and there have been quite a few, I’ll get to that later) has had at leastone standout performance. In 2004 we sang in a small church in front of a beautiful stained glass window that covered most of the wall. As the sun was setting the light struck the window at an angle that caused the choir to be illuminated by deep hues of indigo and azure. The moment was palpably electric, and afterwards Holly gathered us in a circle and told the story of the origins of VIP. In 2006 VIP performed at a Methodist church in Killarney, Ireland. Our excitement at being in a different country (and some pre-concert cheerleading) moved us to an inspired and memorable performance. In 2014 our seminal moment came not at a church or performance hall, but a retirement home. At this point I had graduated college and was along as a chaperone/assistant director and as such I was conducting one of our pieces. I can’t articulate why this day proved to be our best performance, but being on the other side of the singing (and especially being able to conduct) was incredibly stirring.

I think that these moments have stuck with me because in each instance there was an indefinable energy that moved spiritedly through the every member of the ensemble. Not surprisingly, these were usually our best musical showings as well, as I believe there is no substitution for the exhilaration born of shared passion. I can testify that this vitality and spirituality, this je ne sais quoi, lived in our performance at the Nashville Public Library, and etched this day in my memory forever.

I have been involved in Voices In Praise in some capacity for the last 17 years. I’ve worn many different hats, but this year I decided to try and give back something to an organization that was so formative and impactful to my personal life and career. I composed a piece of music specifically for VIP, a setting of the ninth century latin hymn ‘Ubi Caritas’, or ‘Live In Charity’. I was drawn to the text because it speaks of God’s omnipresence in virtues such as charity, love, and sincerity - all watchwords of VIP. I confess that the piece was challenging, perhaps just above the threshold of what I believed their ability to be. The rehearsal and preparation of my piece was arduous and at times frustrating. Holly and I had a frank conversation the Friday before we left for tour about the viability of the piece in the context of our repertoire. We elected to take a leap of faith and trust that VIP would rise to the occasion, as they/we have so often done before.

When they sang Ubi Caritas today I experienced the most surreal sense of validation. Not only in my own personal choice to follow the path of a professional musician and conductor, but in their fortitude, loyalty, and pure ability. Their voices soared in that space and the music was represented to the highest degree of integrity that I could have conceived when I set out to compose it. It was also a special honor to have Holly and our accompanist Brie sing with the choir on the piece. And not only was Ubi Caritas exceptional, every other piece they performed was simply stunning (Holly even let me sing part of one song!). It was the musical triumph I had been waiting for.

Some of the singers later approached me to thank me for the piece that I dedicated to them. However it is I who felt the most profound sense of gratitude and humility in the three minute duration of the song and beyond. They gave me an inimitable gift today by realizing a piece of music that represented the culmination of a 17 year relationship that has been so abundantly characterized by mutual love, charity, and sincerity. I warmly anticipate the memories that future generations of Voices In Praise will construct with such a firm foundation beneath them. 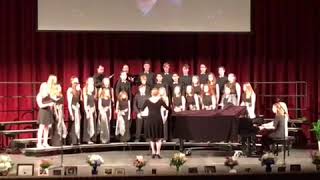